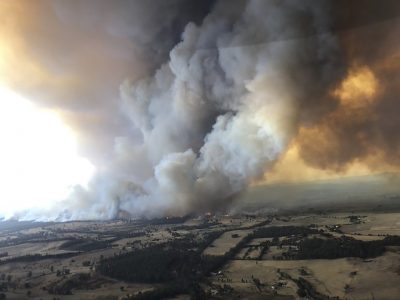 The intense and boundless fires that have already devoured nearly 18 millions of acres of Australia are generating their own distinctive weather systems that spin off dangerous new storms and spread the inferno.

Gigantic blazes are sending columns of smoke as high as 30 miles above the earth, according to the Australian government Bureau of Meteorology, triggering electrical storms, as well as dry lightening and high winds that spread burning embers and start more fires. The dynamics inside the blazes themselves make the fires more unpredictable and harder to fight. Scientists say particles lifted into the stratosphere can travel thousands of miles and influence regional and global weather.

Tim Flannery, chief councillor for Australia’s Climate Council, writing in The New York Review of Books,  says thousands of people who fled burning and endangered homes, many of them huddled on beaches, have been rescued by the military in what may turn out to be the nation’s biggest evacuation in history.  Flannery reports that major roads have been blocked, the great cities of Melbourne and Sydney have been smoke bound for months, and air quality in the capital, Canberra, was so bad government and university offices were closed.  He writes that blazes penetrated rainforest in Queensland and New South Wales, previously untouched by wild fires. Scientists estimate a million wild animals have died, and that some may face extinction.  Australia’s fire season, which has usually been between December and March, has many weeks to go.

The Australian weather service explains how the complex interactions among fire,  changeable weather, temperature and moisture let new weather systems develop within a blaze.  Intense heat from the fire causes air to rise rapidly inside a plume of smoke.  Turbulence of that hot air draws cooler outside air into the plume.  As the air within the plume rises to higher elevations, atmospheric pressure drops, causing the plume to expand and cool further.  If air cools enough, moisture in the air will condense, forming a cumulous cloud.  As the cloud continues to expand and cool, condensation releases heat, making the cloud warmer and more buoyant. It can then accelerate into the lower stratosphere, where collisions of ice particles in the upper regions build up electrical charges that are discharged as lightening.  The cloud, now having produced a thunderstorm, even without much rain, is now known as pyrocumulonimbus.

These dangerous clouds generate strong unpredictable winds and unexpected fire behavior.  The intense heat-induced updraft can suck in so much air so fast that furious winds from all directions blast toward the plume.  Such winds can change direction quickly, and airborne burning embers have been known to ignite new fires miles away.  Force of the winds has been known to snap tree trunks and pull trees out of the ground.

An ABC story by Irena Ceranic quotes fire ecology specialist   Kevin Tolhurst, an associate professor at Melbourne University, who describes “lightening created by the pyrocumulonimbus cloud that was created by the fire itself.”  He said a fire tornado forms when the air is not only rising but starts to spin. While small fires can generate temporary air whirls, a firenado can be miles across and last longer. The world’s first firenado, according to the story, was observed in 2003 when Canberra brushfires destroyed 500 homes and took four lives. Inside a smoke plume, moisture in air that has risen high into atmosphere can condense and combine with soot and ash to form dark hail stones.

Many local and global factors combined to produce the record-setting heat and drought that was making Australia a tinderbox in the summer and fall of 2019. Another Washington Post story by Freeman and Sarah Kaplan explains:

From the west, a seesaw circulation pattern known as the Indian Ocean Dipole caused air to sink over Australia, heating and drying the continent. Meanwhile, thousands of miles away and about 10 miles up, in the thin, frigid slice of the atmosphere on top of the South Pole, something shifted. In an event that is unprecedented in 40 years of record-keeping, temperatures over Antarctica rose rapidly, causing the polar vortex over the Southern Hemisphere to break down and even reverse direction. This had cascading effects on weather patterns: The westerly winds that blow across the Southern Ocean shifted northward. Cold fronts moved across Australia, bringing intense wind but little rain.

Scientists say the fire nightmare unfolding in Australia is an indication of the type of extreme events the rest of the world may soon face.  Climate change and global warming may seem gradual, but sudden and dramatic local changes can occur unexpectedly in the world’s uncharted future.

What Complexity Term(s) Relate to this Article?

In this article extreme events in global weather systems can be further identified as Chaotic Events, a term that describes events or situations that are radically unpredictable and uncontrollable (e.g. during a natural disaster). Spontaneity, resourcefulness, and improvisation are required, rather than standard operating procedure.

Visit and bookmark the Plexus Institute Complexity Library for additional resources to help you reference, connect and use terms and definitions from complexity science to real life experiences.