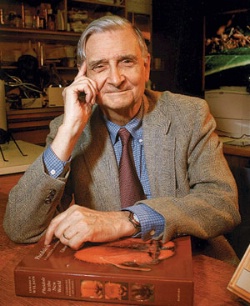 The first thing that must be said of Edward O. Wilson is that he is a gentleman. Not that he is one of the world’s greatest living scientists (which he is), nor that he has twice won the Pulitzer Prize (which he has); nor even that he founded the field of science that is sociobiology (which he did). What is most striking about the man is his humility, his humanity.

This is significant, not just as idle hero worship (okay, it’s that too), but as a testament to his tremendous care for human beings, and his preoccupation with the relationships that bond them. He is what he preaches.

In November of 2001, Dr. Wilson accepted the invitation of Curt Lindberg and Roger Lewin and met with several members of The Plexus Institute at the Faculty Club of Harvard University. “What’s the agenda?” one Plexus member asked Curt Lindberg as we waited for Dr. Wilson’s arrival. “What are we going to accomplish in this session?”

“Oh, I don’t know,” responded Lindberg. “I thought we’d just talk, ask him some questions about complexity.” We chuckled at this response, which at first blush seemed rather casual for a meeting with such an eminent figure… but on second thought bespeaks Curt’s own embodiment of the principles of complexity, and his unwavering faith that meaning, if given sufficient berth, will emerge.

And so Wilson arrived and we did exactly as Curt had suggested. We just talked.

This is what we learned.

In his groundbreaking 1998 book Consilience, Wilson expressed reservations about complexity science. At this point, he asserted, it’s a promising new theory with too little empirical data to support it.

His healthy skepticism had not escaped the Plexus Institute. So when Roger Lewin began the meeting by asking Wilson to elaborate on his stance, Wilson surprised us with his response: “Complexity science is where we are going,” he said, referring to scientific thought in the 21st century. “It is the future.”

Lewin asked: Why the turnaround?

“There is more data,” he said simply. A lot is known in 2001 that was not known in 1998 – particularly in the supportive data from the study of ecosystems, social insects and cellular dynamics.

“Very few intellectual conceptions have the breadth and flexibility of complexity science,” he continued. He pointed out that most scientists are too specialized and too busy to contribute to any cross-disciplinary synthesis of emerging data, to nurture consilience. (He apologized for this, fearing that the reference to the title of his own book might appear self-serving. Ever the gentleman.)

“Today it is harder for a scientist to single-handedly make new discoveries,” he said. Rather, the future of science lies in a collaborative synthesis of existing data to understand interactions within complex systems at all levels… beyond the level of the single cell.

He offered as an example the emerging field of proteonomics as a pure example of complexity thinking. Proteonomics explores the dynamics of the cell at the molecular level – and then makes the important bridge to higher systems: Microorganisms, social insects, human beings and, ultimately, ecosystems.

Consider as evidence the phenomenal advances in mapping the human genome. One of Wilson’s Harvard colleagues, Dan Brandon, is currently “blowing through” the process developing nanopore technology to automate the sequencing process, so that soon a person’s entire genome may be mapped in days or hours, rather than years and months. What makes this advance possible? It is because scientists are no longer being reductionistic, focusing solely on the gene sequence. Instead, they are considering the problem through a complexity proteonomics lens, holistically considering the folding of molecules and their interactions.

The appearance of complexity on Wilson’s radar screen is more than just a passing curiosity. Its influence is steadily creeping into the realm he knows and loves: The biological sciences.

Wilson cites as another pure complexity example the BioDepth Project’s EcoTron initiative, which is designed to study the stability of ecosystems. “There was a time when it was believed that an increased number of species in an ecosystem produced increased instability,” he said. “Intuition told us that it should be the other way around: The more species you have in an ecosystem, the more stability there should be. But we were never able to back it up with data.”  But now, thanks to the brute force of computer analysis, it’s possible to process such complex data. Today, EcoTron’s evidence is supporting what intuition suggested all along: Increased diversity produces increased resilience.

“In the southern Appalachian Mountains, there not the diversity that you would find in, say, the rain forest,” he illustrated. “And so when a new species of aphids intruded in the Appalachians, they did an enormous amount of damage. There just wasn’t a lot of resilience in the system.”  In biological systems, complexity produces viability. Diversity spawns health.

Consider another complexity-rich realm: sociobiology. It’s an intriguing science that is preoccupied with the interactions between biological and social forces in shaping  human thought and behavior. If you want to understand human response, you can’t focus solely at the level of the neuron. That’s traditional reductionistic thinking. Instead, scientists must look “one level up”, and look at the complex linkages in the mind, the “epigenetic rules” that determine behavior.

A Message to the Plexus Institute

Before leaving, E. O. Wilson shared a few words of encouragement. “You have a grand opportunity before you,” he said.  “I don’t know of another organization devoted to nurturing the science and its application. The Plexus Institute could serve as an umbrella organization to support complexity initiatives and nurture the science along.”

Wilson expressed enthusiasm for the Plexus Institute’s focus on systems at all levels, from the individual to the organization to society… and shared his hope that efforts would focus strongly on the area he is most passionate about: conservation. The two subjects go hand in hand.

“Those who study Complexity Theory (and participate in Plexus Institute) should be ardent conservationists,” he said with conviction.  “You have a great opportunity,” he emphasized again, “to inform the public about the interactions between humans and nature.” Those who focus on Complexity Theory can make contributions to natural resource conservation by explaining the importance of diversity, interactions, interdependence, resiliency, and robustness to perturbations.

It was getting late in the afternoon. The sky was graying, and an unusually warm November wind was encircling the Harvard Faculty Club. Wilson – ever generous with his time – was nonetheless anxious to return home to his wife, who was ailing. As Wilson stood to put on his coat, we all stood too, challenged, affirmed and, frankly, moved by the kindness and conviction of this great man of science. Wilson was right: It was a grand opportunity.

On a personal note, I have been ardent fan of Wilson and several weeks ago purchased his book Consilience, one of the few I did not already own.  I recalled reading a summary of this early meeting with Wilson but only after I searched the archives of Plexus this week to locate the summary did I notice the reference to Consilience.  In many ways, consilience is what we have always practiced at Plexus.