A Generative “Dialogue” leads to discovery of new ideas, behaviors, practices and unanticipated sources of value that could not have been predicted in advance. A generative process can nurture and guide the birth of new ways of thinking and doing.

Generative Dialogue is not just clever wordsmithing, it is an intentional and co-creative engagement that delivers on the promise that the combined interactions of individuals produce a total effect that is greater than the sum of an individual’s actions. 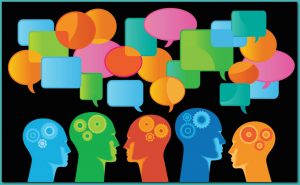 The work of Lorenz and Natasha Sell, co-founders of Sutra, is focused on transforming the process and experiences of online engagements. “Facilitating an engaged and effective group experience online is part art and part science.  The benefit is that you deliver a much more embodied learning experience. In the pursuit of practical knowledge, we have the opportunity to cultivate wisdom.  People can learn to listen and cooperate. They can relate to knowledge more deeply through shared personal experiences. And they can learn to hold space for those experiences – both their own and those of others.  Everyone can become more self-aware and connect with deeper sources of understanding on a collective level.”

A learning experience is more than just the knowledge that is being taught.  It is also the experience of learning. This experience offers an opportunity to learn new ways of relating to the world, ourselves, and other people.  A collaborative learning process can introduce people to new forms of collective interaction. Alex Pentland, the director of MIT’s Human Dynamics Lab, goes into detail about the potential of collective intelligence in his book, Social Physics:

According to Pentland, the single largest factor in predicting group intelligence is equality of participation, or what he calls idea flow. 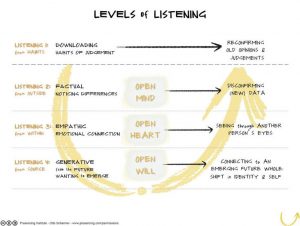 Beyond equality of participation, the Sells consider how to improve the quality of the interaction itself by emphasizing the quality of presence that each participant brings.  The Presencing Institute, also out of MIT, categorizes different levels of interaction which can help conceptualize somewhat intangible attributes such as listening and presence: downloading, factual, emphatic, generative.

“Much of our aspiration revolves around shifting interactions towards more emphatic and generative levels.  What we try to optimize for is somewhat intangible and difficult to measure. How do you measure the quality of an interaction if you are not part of it?  Is it measured by how people feel afterwards? Is it measured by some sort of productive output? What are the characteristics of good conversations and is there a way to quantify and optimize for that in a piece of software?  How do you measure things like listening, empathy, or generativity?”

There is a broad spectrum of qualitative experience when it comes to collective connection, at the peak of which is generative interaction.  This is a type of collective flow state that can be difficult to describe. Professional athletes often talk about experiencing a certain flow state at the height of a game.  MIT Professor Otto Scharmer, who leads the Presencing Institute, shares the following anecdote:

Bill Russell, the key player on the most successful basketball team ever (the Boston Celtics, who won 11 championships in 13 years), described his experience of playing in the zone as follows:

Every so often a Celtics game would heat up so that it became more than a physical or even mental game, and would be magical. That feeling is difficult to describe, and I certainly never talked about it when I was playing. When it happened, I could feel my play rise to a new level. It came rarely, and would last anywhere from five minutes to a whole quarter, or more. . . . At that special level, all sorts of odd things happened: The game would be in the white heat of competition, and yet somehow I wouldn’t feel competitive, which is a miracle in itself. I’d be putting out the maximum effort, straining, coughing up parts of my lungs as we ran, and yet I never felt the pain. The game would move so quickly that every fake, cut, and pass would be surprising, and yet nothing could surprise me. It was almost as if we were playing in slow motion. During those spells, I could almost sense how the next play would develop and where the next shot would be taken. . . . My premonitions would be consistently correct, and I always felt then that I not only knew all the Celtics by heart, but also all the opposing players, and that they all knew me. There have been many times in my career when I felt moved or joyful, but these were the moments when I had chills pulsing up and down my spine. [William F. Russell, Second Wind: The Memoirs of an Opinionated Man, 1979].

Approaching this quality of interaction in a small group is both mystical and practical.  Most importantly, Natasha and Lorenz believe that it is accessible and beneficial to almost any learning experience. The ability to tap into deeper sources of collective insight can only serve to enrich both knowledge and learner.

“These are fundamentally new skills that most people are never taught.  It’s almost like active co-creative meditation. There’s no doctrine or philosophy that needs to be accepted.  Just a willingness to be increasingly attentive and receptive to the collective experience. When a group of people connect with genuine presence and shared intention, the intelligence of the experience takes over and naturally guides the interaction.  In the process, a joyful energy emerges that serves to build deep relationships and lasting community. Creating the conditions to support this kind of interaction is the guiding intention behind Sutra.”

Join Lorenz Sell for an upcoming Plexus Pop-Up Conversation, Why REAL Dialogue is Generative on May 1 @ 1:00 pm – 2:00 pm EDT.