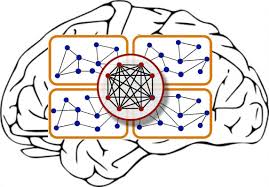 In 2009, the Human Connectome Project (HCP) was launched to  to build a “network map” (connectome) for the healthy human brain. The purpose of the connectome is to decipher the amazingly complex wiring diagram to reveal what makes us uniquely human and what makes every person different from all others. Dr. Olaf Sporns from Indiana University at Bloomington, author of Networks of the Brain (February 2011) has been leading the work of creating a complete connection (network) map of the brain.  According to Sporns, “Understanding the human brain is one of the great scientific challenges of the 21st century.”

The HCP will comprehensively map human brain circuitry in 1,200 healthy adults using cutting-edge methods of noninvasive neuroimaging. It will yield invaluable information about brain connectivity, its relationship to behavior, and the contributions of genetic and environmental factors to individual differences in brain circuitry.  Consider the discovery  in 2008 that London taxi drivers have a special form of navigation system in their brains.  The study on how the brain functions under very specific conditions, had cabbies navigate a virtual simulation of various routes through the streets of London while their brains were scanned via Functional Magnetic Resonance Imaging(fMRI). According to the BBC report on research lead Dr Hugo Spiers from University College London, “Different brain regions were activated as they considered route options, spotted familiar landmarks or thought about their customers.” Maybe that voice in our heads is our own personal version of the voice on our GPS?

Jonah Lehrer, author of Proust Was A Neuroscientist and How we Decide has written that the latest consumer technologies have a way of becoming metaphors for the mind. “Before the brain was a binary code running on three pounds of cellular microchips, it was an impressive calculator, or a camera, or a blank slate. In other words, we’re constantly superimposing the gadgets of the day onto the cortex.” In that context, understanding the brain as a GPS system makes sense.

An article in ScienceDaily (Mar. 8, 2011) reports research that suggests that “the human brain operates as a highly interconnected small-world network, not as a collection of discrete regions as previously believed.” Research published in the Journal of Neuroscience describes the relationship of the brain’s neural networks and specific cognitive functions such as information processing and language.

Another report in Science Daily (July, 2011) referenced an article in the journal Cerebral Cortex, showing that the brain is characterized by a highly consistent, weighted network among the functional areas of the cortex, which are responsible for such functions as vision, hearing, touch, movement control and complex associations. Maria Ercsey-Ravasz and Zoltan Toroczkai of the University of Notre Dame’s Interdisciplinary Center for Network Science and Applications (iCeNSA), suggests that researchers have given up on the potential of using computer circuitry as a helpful metaphor. “It turns out the brain is not just this beautiful circuitry you could just back-engineer,” Toroczkai says. “It is an amazingly complex system, and this is why it is very hard to understand why it works.”

As we fast forward to 2017, it is only surprising that the wide spread acceptance of the brain as a complex network is less than 10 years old. A 2016 article, Human brain mapped in unprecedented detail, in Nature  is a snapshot of the accelerating knowledge base being created in brain mapping and neuroscience. This video offers insights on both how far we have come and how far we have yet to go.

As Plexus reviews it’s own thinking and contributions over the past decade, the importance of “network thinking” has been an important part of our research, conversations and practice in organizations. Working in Networks is one of four current Plexus Initiatives & Project areas that Address real-world challenges through the understanding, advancement and diffusion of ideas and practices rooted in the principles of complexity.

This post was originally written by Lisa Kimball, Thursday, July 21, 2011.