Skip to content
It’s Only Weird the first Time: How Curiosity and Courage Expand Possibility! 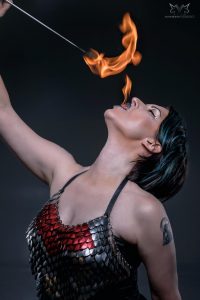 During the week, Dr. Michelle Carnes is a public health anthropologist in American Indian and LGBTQ youth suicide prevention, cultural preservation and restoration.  On weekends, she eats fire. And escapes rope ties. And swallows swords.

Michelle Carnes’ evolution to professional sideshow stuntress is rooted in her own resolve to conquer fear. At first, it’s hard to get past the fear, she said. “When the fire is coming at your face, a part of you says this is a bad idea. But once you learn how fire works, it’s less scary and you discover what you can do.”

People ask her all the time, “How did you get into this stuff?” It’s a personal journey that began in 2001 when Michelle was living in Chicago. One night as she walked home from class a violent assailant attacked her from behind. She ended up with a bloody nose, two black eyes, broken glasses, and vertigo. She had no health insurance for her physical injuries but it was the intense emotional and mental dislocations that took longest to heal.

“I was terrified to leave the house,” she recalled. “It was very hard. People don’t know what to say to you, and they try to talk you out of your fear. They don’t understand the way it affects you. PTSD was not part of the cultural language at that time.   It was very isolating, and I feared I would feel like this for the rest of my life.”

Two years later, still feeling the physiological symptoms of the attack, disproportionate responses to stimuli, anxiety, panic attacks and sudden anger, she started teaching as part of her graduate program and it made her feel better.  “I realized being in front of a class was a kind of performance. I felt competent. I knew the material, and how to present it in a way that that was meaningful to people in the class,” she said. “I became focused on them, and began to forget about what was going with me. That was my first clue that getting up in front of a group was helpful and powerful.”

Several years later, she went back to the scene of her attack and used film to tell the story of what had happened. “Digital storytelling is a therapeutic technique used commonly in my work with tribal communities,” she said. “Getting a video camera and telling a hard story using documentary film-making techniques lessens the burden of what you carry around and help other people understand. When I made my film, it felt like a huge weight had been lifted – and now, in my work, we put video cameras in the hands of youth with tough stories to tell. Art and creativity are deeply healing ways to approach trauma. It’s not just my job; it’s something I know personally and intimately.”

Michelle began taking improv classes in 2013 on a whim. It felt fun and therapeutic and reduced her panic attacks significantly. Next, she learned stand-up comedy. Michelle discovered she delighted in audience reactions to her taboo-shattering humor. Sideshow stunt performing was a natural next step.

Now she is the producer of the longest-running Washington DC variety show, the DC Weirdo Show, which is certainly not her “last act!”