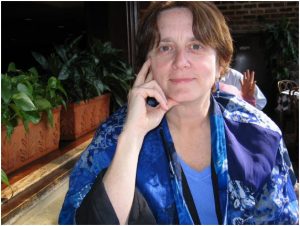 Lisa Kimball had magical qualities – she would gather and connect a diverse group of people, let each person soar above all expectations and gently guide the group as they co- created something remarkable. Lisa continually shared her gifts with a wide range of professional groups, clients and friends. Stories of Lisa’s talents, generosity and big heart are now being shared across many networks and between colleagues and friends.

What we share is more than a remembrance, it is the enduring energy of Lisa’s voice encouraging us to never stop searching for a good collaboration, to see the world through a new lens, to take risks, to believe in what makes each of us special and of course, to have fun.

A dear friend and neighbor of Lisa’s on Martha’s Vineyard, Nancy Aronie offers writing workshops that were an annual summer event for Lisa and everyone she could convince to join her. The process is simple, the results are extraordinary.

You begin with a simple prompt: When I Think about Lisa….

Write for ten minutes without stopping, thinking or censoring yourself.

You are also welcome to share a drawing, poem, song or other media.

Complexity Science Reframes Healthcare For Women and Everyone Else!

Complexity Science Reframes Healthcare For Women and Everyone Else!

Improvisation: The Most Complex Human Ability?

It’s Only Weird the first Time: How Curiosity and Courage Expand Possibility!