Skip to content
Improvisation: The Most Complex Human Ability? 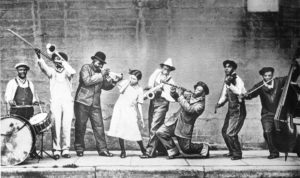 What goes on in the brains of jazz musicians at work?

“When Melody Takes a Detour, the Science Begins,” a New York Times story by Pam Belluck, captures the thoughts of musicians and scholars who are looking at the importance of music in human development, cognition and communication. One of the ways music touches us, apparently, is by its tonal and rhythmic patterns. We like familiar and predictable patterns, but we also like a certain amount of surprise.

Brain imaging studies by Edward Large at Florida Atlantic University, and research by Daniel J. Levitin at McGill University show that we like the novel and familiar combined, the story says. We like Chopin piano pieces with rich variations in volume, duration and combinations of notes, but not random mixes. So what processes are in play when musicians improvise, spontaneously creating melodies and harmonies that haven’t been played before?

When guitarist Pat Metheny and bassist Larry Grenadier improvised a new arrangement of the song “Autumn Leaves“ –although the notes and timing diverged from the classic version, the audience recognized the song because “the new and the known” run on dual tracks in our brains. In much the same way jazz musicians improvise by combining individual experiences to create a new collaborative interpretation of the music, our brains are continually composing variations of sense-making and action.

Jamshed Bharucha, a neuroscientist, President Emeritus of Cooper Union, and a violinist himself, said our brains must also manage conscious and unconscious processes simultaneously. “The vast majority of stuff that goes on in our brains we do not have conscious access to,” he told The Times. “But music requires “years and years of practice in order to make what is conscious unconscious.” So musical improvisation requires discipline and technical mastery.

Gary Marcus, a New York University psychology professor, told Belluck improvising maybe one of the most complex abilities a human can develop because it requires extraordinary skill, the ability for empathetic interaction, and “fantastic motor control” because a performer needs to be fast and accurate, and the natural tendency of the brain is to do one or the other, not both.

Read Pam Belluck’s story here and enjoy Daniel Levitin’s discussion of his book, This is Your Brain on Music.