Skip to content
A Healing Fix From the Eclipse? 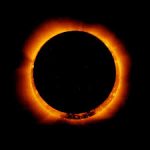 Baron, who is an eclipse fanatic himself, wrote the book “American Eclipse: A Nation’s Epic Race To Catch The Shadow Of The Moon And Win The Glory Of The World.”It’s a fascinating story of the total eclipse of 1878, a year when the U.S. population was still bitterly divided over the presidential election of 1876, one of the strangest and most controversial electoral contests in American history.

The Democratic candidate Samuel J. Tildon of New York won the popular vote, but Republican Rutherford B. Hayes of Ohio won the White House. At first count, Tilden was also ahead in electoral votes, but 20 votes from four states were in dispute. The resulting Compromise of 1877, was an odd unwritten political deal. Congressional Democrats helped Hayes win in exchange for Republican agreement to remove federal troops from southern states, ending the Reconstruction era and effectively disenfranchising African Americans recently released from slavery. Both parties were accused of fraud and corruption. The election and the Compromise aroused years of rancorous partisan animosity.

Could this eclipse provide opportunity for national healing in a time of partisan discord?

The total solar eclipse in July 1878 was highly anticipated, and it changed the national conversation in constructive ways, Baron writes. For a time politics was cast aside. The eclipse crossed through the Montana Territory in a wide path to Texas. Government scientists joined independent and academic astronomers and citizen sky watchers with differing partisan views who flocked to viewing sites. Scientists were eager to show the world that America’s intellectual power equaled that of Europe. “The country shared a national goal-the pursuit of science-that infused astronomy with patriotic fervor,” Baron writes in his Scientific American blog. “As the moon’s shadow descended on the Rocky Mountains, one group of observers, their party affiliations unstated, joined in a moment of fellowship.” Awed by the spectacle, they spontaneously burst into joyful rendition of “My Country ’tis of Thee.”

Baron hopes something similar will happen with this year’s eclipse, when the moon’s shadow will descend along a 70 mile-wide path from Oregon to South Carolina. It’s been almost a century since a solar eclipse passed the country from coast to coast. Baron said in an NPR interview that he booked his hotel room in Jackson, Wyoming three year ago. He notes that many towns in the path of the eclipsehave already run out of lodging, and many locals are opening their homes by way of Airbnb and offering their farm fields as camp sites.

“This is just what we need,” he writes, “an excuse for millions of people with different backgrounds to come together. It will be an occasion for Trump’s America to host visitors form the land of Obama, as New Yorkers head to the foothills of Appalachia, and Denverites head to the Nebraska plains.”

Psychologists know powerfully inspiring experiences benefit individuals and societies, Baron writes, encouraging empathy and humility, and providing distraction from the issues that divide us. And Baron tells of the rare and dazzling nature of a total eclipse. For those in its path, he says, the period of darkness in broad daylight will last only two minutes and 40 seconds, but that brief time will be awesome.

“A total eclipse peels back Earth’s blue sky to expose an incomprehensible vista, a cosmic view toward the center of our solar system,” he writes. “The brighter stars and planets appear at midday, and floating among them you see the sun’s outer atmosphere, the corona, shimmering like a tinsel wreath in the depths of space. The sight is humbling and mystical.”