Skip to content
Conversations to Reduce the Discord in Our Country: Better Angels

This article was written by Plexus Network member Nancy Dixon, whose work focuses on the people side of knowledge management.

“Our most effective knowledge sharing tool is conversation. The words we choose, the questions we ask, and the metaphors we use to explain ourselves, are what determine our success in creating new knowledge, as well as sharing that knowledge with each other.”

Like many others, I have been sorely troubled by the level of disrespect in our public conversations. For that reason, I’ve become associated with an organization that is trying to do something about it, Better Angels.

I feel positive about Better Angels because it is not trying to convince anyone to change their mind about their political position, rather the goal is for both sides to listen and try to understand what the other side is saying – just that!  You might think that’s not enough. But I think the goal of returning to civil discourse is the most constructive goal we could have. We don’t need everyone to agree about the direction of our country. We will always need people who bring different perspectives to the national conversation. We need those that disagree to correct our mistakes, which are inevitable. Disagreement is what makes democracy so powerful, but we need that conversation to be respectful.  We can’t hear each other when we are shouting vitriolic statements. 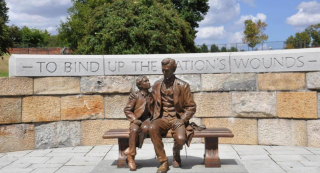 The name of the group, “Better Angels” is taken from Lincoln’s first inaugural address. “We are not enemies, but friends. We must not be enemies. Though passion may have strained, it must not break our bonds of affection. The mystic chords of memory…will yet swell the chorus of the Union, when again touched, as surely they will be, by the better angels of our nature.   Abraham Lincoln, March 4, 1861

As difficult as it is to think that way, I believe we are not enemies, that those on the other side have reasons for thinking as they do; reasons we need to understand and respect, even when we do not agree.

Better Angels offers two kinds of workshops, the Red/Blue workshop and the Skills Workshop, both of which are free.  The terms Red and Blue refer, roughly to the two sides of the political divide.  Red is the label Better Angels uses for those of us that are conservative, (pro-life, 2nd amendment advocates, Republicans, etc.); Blue is the label for those of us who are liberal (pro-choice, Democrats, pro-immigration, etc.).

The goals of the Red/Blue workshop, which brings together equal numbers of each side, are:

The goals of the Skills workshop (which does not have to have equal numbers) are:

For a long while now, my professional work has been guided by the words of Margaret Mead, Never doubt that a small group of thoughtful, committed citizens can change the world. Indeed, it is the only thing that ever has.  As participants leave a Red/Blue workshop, I hear them acknowledging the humanness of the other side. I hear people reciting those things that they have in common with the other side, e.g. a desire for fairness, help for those that cannot help themselves, a positive future for our children. I hear people laughing together, promising to get together for coffee, and smiling and waving at their counterparts. I hear change, one small group at a time.

Believing strongly, as I do, that conversation is the most powerful tool we have to bring about change, whether in an organization or in the public discourse, I am committed to helping bring about this change in our country by serving as a moderator for the workshops. The online moderator training is in-depth with step-by-step directions on how to lead the workshops. Even with the excellent moderator training provided, it still takes skilled facilitators to lead the workshops.  Many of you who read my blog are, like me, long time facilitators. To heal the divide, Better Angels needs a host of skilled facilitators to take the moderator training and lead workshops across the country.  Better Angels is a volunteer effort. Facilitators don’t get paid, and there is no cost for the training. Give it some thought and if you find yourself interested here is where you can read more about the work of Better Angels, and here is where you will find the moderator application form.

Some time ago I wrote this poem which expresses my thoughts about the value of conversation far better than my prose ever does.

The Paradox of Dialogue

Amid complexity and strife
With no clear path at hand
When trusted answers won’t suffice
How then to understand?

Complexity to discourse turns.
We’ve naught but this poor tool
Of fervent words in counterpoint
Uncertainty to school.

Then heed the voices of dissent,
Yet honor sanctioned thought
And strain to hear what’s left unsaid
And challenge what is not

There’s knowing at the heart of this
Cacophony of sound.
Through insight borne of dissonance
Rare clarity is found

The paradox of dialogue;
That simple talk can yield
An understanding so profound
Shared wisdom is revealed