Bees and humans have been closely associated for a millennia. We have been fascinated by bees ever since our ancient ancestors tasted honey. Scientists have a wealth of knowledge about bees, their behavior and their extraordinary social organization, but mysteries remain. Researchers believe the mapping of the bee genome may hold clues to how inborn and environmental factors interact to influence what genes actually do in the brain to regulate behavior.

In December 2004, Gene Robinson, wrote a  compelling New York Times Op-Ed,  that prompt us in 2018 to think about the importance and interdependence of all players in the earth’s ecosystems. From understanding the behavioral connection of bees and humans to actively confronting how human behavior has impacted the environment, which in turn has jeopardized the health of bees.

The studies show that some genes cause the brain to respond differently depending on inheritance or environmental factors. For example, fruit flies inherit different versions of a gene that helps make them slow- or fast-paced foragers for life. But this very same gene that is fixed forever in these different types of flies can change in the honeybee depending on the needs of the hive, allowing a bee to shift from working inside the hive to collecting food from flowers.

What compelling new questions emerge during a conversation about bees, genomes, art, and self-organization in biological systems? Gene Robinson, Scott Camazine and Wayne Grody lead a PlexusCall in July 2007 that offers a peak into the cross-disciplinary practice of Complexity Thinking that has been a staple within the Plexus Network.

Gene E. Robinson is a professor of integrative biology and entomology at the University of Illinois at Urbana-Champaign. He is the principal investigator in honey bee research designed to understand the mechanisms that govern social behavior. Using genomics and systems biology to study the Western honey bee, Apis mellifera, along with other species of bees , he can uses patterns to illustrate the mechanisms and evolution of social life. This work begins to explain the function and evolution of behavioral mechanisms that integrate the activity of individuals in a society, neural and neuroendocrine mechanisms that regulate behavior within the brain of the individual, and the genes that influence social behavior. 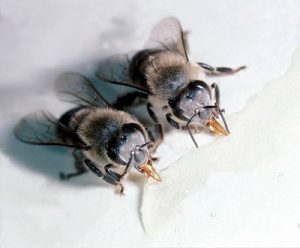 Scott Camazine, a biologist, naturalist, medical illustrator, photographer and lead author of Self-Organization in Biological Systems, has This book is a sophisticated yet accessible introduction to self-organization in biological systems and the physical world. Dr. Camazine presents this difficult material in an imaginative, lucid and engaging way. Evidence of this is an engaging article “Patterns in Nature” in Natural History Magazine. Scott Camazine has also written and lectured on topics ranging from autism to self-organization.  He is also an accomplished wood turner.  As a biologist, he loves to explore the natural world.  Woodturning provides him with an opportunity to search fields and woodlands for unusual trees.  Each tree has a different story to tell about its growth and climatic conditions.

Wayne W. Grody is a Professor in the Departments of Pathology & Laboratory Medicine, Pediatrics, and Human Genetics at the UCLA School of Medicine.  He is the founder and director of the Diagnostic Molecular Pathology Laboratory within the UCLA Medical Center, one of the first such facilities in the country to offer DNA-based tests for diagnosis of a wide variety of genetic, infectious, and neoplastic diseases, as well as bone marrow engraftment, patient specimen identification and paternity testing by DNA fingerprinting.  He is also an attending physician in the Department of Pediatrics, specializing in the care of patients with or at risk for genetic disorders.  As a sidelight, Dr. Grody has been active in the film and television industries for many years, first as film critic for MD Magazine, a national leisure journal for physicians, then as technical advisor and sometime writer for a number of feature films, TV movies, and television series including Life Goes On, Chicago Hope, CSI, Medium, Heroes, and both Nutty Professor movies.