Researchers have developed a team of robot that can apply tiny amounts of force in concert to move objects thousands of times their own weight.

The team members are six microrobots weighing a mere 3.5 ounces together, and they can pull car that weighs more two tons.  The micro-robots, modeled after ants, are so tiny their pieces had to be put together with tweezers. The car is the one that researcher David Christensen uses to commute to the Biomimetics and Dexterous Manipulation Laboratory on the Stanford University campus. Christensen told The New York Times the microrobots’ feat would be the equivalent of six humans moving a weight equal to that of the Eiffel Tower and three Statues of Liberty.

“Karl Marx was right, socialism works, it’s just that he had the wrong species.” E.O. Wilson 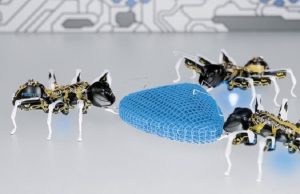 The researchers studied the dynamics of teamwork among ants, the creatures Pulitzer Prize winning biological scientist E. O. Wilson has identified as second only to humans in their social organization despite being individually only one millionth of the size of a human. If ants in a group use three of their six legs simultaneously, the researchers and Wilson observed, their individual force is greatly magnified. Scientists have also found that despite ants’ light weight, the architecture of their necks gives them exceptional individual strength.

In addition to studying group strength, the researchers examined how lessons from the sticky feet of gecko lizards could enable micro-robots that can mimic bats and climb vertical surfaces.  Demonstrating how one of the microrobots could carry more than one kilogram vertically up a glass surface. Christensen and colleagues said that would be like a human carrying an elephant up the side of a skyscraper.

Christensen and Srinivasan Suresh, both graduate students, along with researcher Katie Hahm and mechanical engineering professor  Mark Cutkosky are authors of the paper “Let’s All Pull Together: Principles for Sharing Large Loads in Microrobot Teams,”  which was presented in May 2016 at the International Conference on Robotics and Automation in Stockholm.

The opportunities for using micro-robots continues to grow as both the mechanics and applications are tested in the field. Here are just a few very cool implications.

From the Frank Sinatra song “High Hopes”  with music written by Jimmy Van Heusen and lyrics by Sammy Cahn.

This post was adapted from an earlier archived version – March 25, 2016