Deborah Gordon, a Stanford biology professor who has studied ants for 20 years, found something extraordinarily sophisticated about the way harvester ants forage for food. She discovered that the ant colonies regulate their foraging activities based on the amount of food available and the amount of time it takes for a round trip between the nest and the food.

Gordon recognized that this particular ant behavior approximates the way the Internet works, so she invited Stanford Computer Science Professor Balaji Prabhakar to have a look. Their collaboration is described in a Stanford News story about “the anternet” and their paper is published in Plos Computational Biology.

Individual ants leave the nest looking for the seeds, which they immediately bring back and drop deep into the nest. The more food they find, the faster they return. New foraging trips are initiated based on the rate of return from earlier trips. There’s no central control or boss ant, and no geographic information on where the food is located. Some ants leave pheromone trails in their travels, but these ants don’t. What happens is based on local interactions among the ants in the nest. New foraging trips are signaled by the rate of contact between the antennas of returning ants and the antennas of ants available to leave on the next trip. 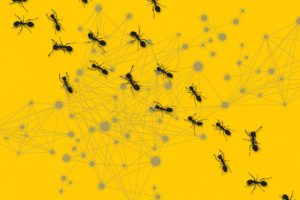 Initially skeptical, Prabhakar quickly saw the validity of Gordon’s insight. “The algorithm the ants were using to discover how much food there is available is essentially the same as that used in the (Internet) Transmission Control Protocol,” he told the Stanford News.

The Transmission Control Protocol, or TCP, is the way information transmission among networked computers is regulated. As the Stanford story explains TCP, as a source A sends a file to a destination B, the file is broken up into numbered packets. Each time B gets a packet, it sends an acknowledgment, or ack, back to A. Speed of ack return indicates the amount of bandwidth available. If the ack comes back at a lower speed than it was sent, it means little bandwidth is available, and transmission traffic is slowed accordingly. If it returns quickly, transmission speed can increase. That’s pretty much the same thing the ants do.

The researchers found another similarity: When a data link is disrupted or broken, the source stops sending packets. If forager ants don’t get back to the nest in 20 minutes, no more ants leave to forage. Each ant is limited, but colonies can achieve some impressively complex computations, and they’ve been evolving for millions of years, probably doing things humans haven’t thought up yet.

“Ant algorithms have to be simple, distributed and scalable—the very qualities that we need in engineering distributed systems,” Gordon said. “I think as we start understanding more about how species of ants regulate their behavior, we will find many more useful applications for network algorithms.”

Since this post was written, a number of interesting studies have built on Gordon’s work.  One of our favorite’s is from MIT, Exploring networks efficiently,Analysis of ant colony behavior could yield better algorithms for network communication.
This post was adapted from an earlier archived version (September 27, 2012)