Skip to content
An Open Mind and a Permeable Consciousness 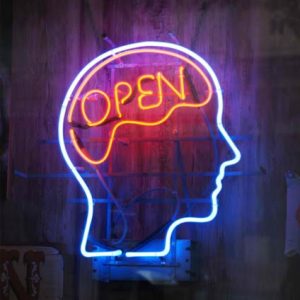 Do you ever get a scrambled mash-up picture in your mind when different visual images appear simultaneously in your left and right fields of vision?

If you do, it may just be the price you pay for being open minded. Luke Smillie, a senior lecturer in psychology and director of the Personality Processes Lab at the University of Melbourne in Australia has been studying open-mindedness and traits that seem to relate to it. One such trait is called binocular rivalry. When different images are presented simultaneously to the left and right eye, the images usually flip back and forth in the mind’s eye, competing with each other for dominance. In an article in Scientific American, Smillie reports that he and colleagues found people with other traits for open mindedness often experience the “mixed precept” and hold it for a longer period of time.

“It is as though the gates of perception are agape, allowing more visual information to flow into consciousness for open people,”Smillie writes.

Smillie and colleagues also examined whether this sort of flexible duality also extends to mixed emotions—the simultaneous experience of opposing and apparently incompatible feelings. Study subjects rated high in openness reported they frequently felt mixed feelings. “This may be another example of ‘permeability of consciousness,’ in this case giving rise to complex emotional experiences,” he writes.

While the neuroscience of personality is still a fledgling field, Smillie writes, some evidence suggests that dopamine, a neurochemical with many functions, may signal the incentive value of information. That may help explain why some people are unusually sensitive to detecting and processing all sorts of external stimuli. Researchers think there may also be an association between openness and the brain’s default network, the neural system that stimulates mind-wandering and imagining other people’s views.

What does it mean to be open minded? Smillie says studies show open-minded people tend to be more receptive to new experiences, and like to explore abstract information found in ideas and sensory information, which comes from sights, sounds and the other physical senses. Some studies have shown they are apt to be politically liberal.

A process called latent inhibition, or learned irrelevance, is a valuable because it helps people select relevant information and screen out the rest. People high in openness are more apt to be aware of the things that might be irrelevant at the time. This shows a more inclusive way of thinking, says Smillie, who describes it as a “leaky” cognitive system that lets in information others screen out. Are you tightly focused or leaky? Try the Gorilla Test here.

Are there advantages to being highly open minded? Are there downsides? What if you’re so open-minded you become overwhelmed with all that information you don’t screen out? Is open-mindedness a uniquely human trait? And how did it evolve? Smillie hopes more research on personalities and brains will help answer those questions.