Skip to content
The Music of the Spheres is Jazz 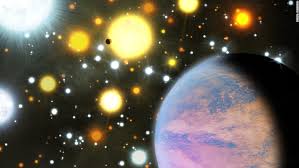 When the discovery of TRAPPIST-1, a system of seven earth sized planets orbiting around a sun 39 light years from our sun, was announced earlier this year, astronomers were excited by the possibility of life in these distant worlds. It appeared there might be lakes and oceans on the surfaces of three or more of these planets.

Daniel Tamayo, an astrophysicist at the University of Toronto at Scarborough’s Center for Planetary Sciences and the Canadian Institute for Theoretical Astrophysics, had a different focus. A Quanta magazine article by Joshua Sokol explains TRAPPIST-1 has the most complex orbiting system yet known in the universe. All seven of the planets are locked in what astrophysicists call orbital resonance.  Each planet takes a certain amount of time to orbit around its sun-that’s its year. Sarah Kaplan, writing in the Washington Post, explains the length of the planets’ years is related to one another in whole number ratios. In the amount of time it takes the outermost planet to complete two or its orbits, she writes, the next planet has completed three orbits, the next one four, the next one six, then nine, 15, and 24.

The Quanta article notes that while the TRAPPIST system formed billions of years ago, astrophysicists who have studied the orbital dynamics believe gravity could pull these orbits askew in as little as a million years. So why haven’t the planets crashed and blown up thesystem? It turns out orbital resonance can be both the seed of chaos and a source of stability. Kaplan writes, for instance, that Pluto and Neptune have orbits that cross, but orbital resonance keeps them at different places long their paths so that they don’t crash.

In a  The Astrophysical Journal Letters, Tamayo and colleagues suggest thepossibility that orbits of the planets might link up and slowly migrate inward, keeping thesystem stable for about 50 million years. That helps, but doesn’t explain the whole question. While Tamayo was working on computer simulation to address this challenge, Matt Russo,a fellow post doc scholar and jazz musician, looked at the TRAPPIST-1 resonance chain and thought he saw music. So Russo, Tamayo and musician Andrew Santaguida have teamed up to translate the intricate arrangement of these orbits into a musical composition.

They sped up the orbital route of the outer planet 200 million times to reach the range of human hearing. Expressed in sound waves, its frequency is a C note. They used the known ratios between the rest of the planets to determine each planet’s signature note. The notes formed major 9th chord. Then they added drum beats for whenever an inner planet overtakes an outer neighbor. “It’s a super creative drummer,” compared with human percussionists, Russo told Quanta. “It’s doing something nobody else would think of.”

Listen to the music here.