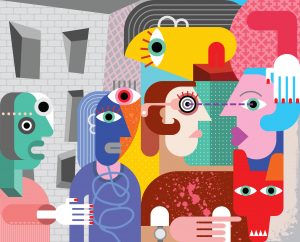 Researchers say we try harder, make better decisions and achieve more when we work in groups that have racial, ethnic and gender diversity.

A Scientific American story by Katherine Phillips describes research showing that scientists, businesses, banks, juries and groups collaborating to solve problems do a better job when people from diverse viewpoints and life experiences come together. People who differ from each other bring differing information, perspectives and opinions to the task at hand. They may also bring tension and discomfort, Phillips writes, and that may be part of the benefit.

Phillips, a professor and senior vice dean at Columbia Business School, Margaret Neale, of Stanford University, and Gregory Northcraft, of the University of Illinois, studied the impact of racial diversity on small decision making groups. Business students at Illinois were divided into groups of three and given a murder mystery to solve. All participants shared a common set of facts, but each person was also given an important clue that only he or she knew. To solve the crime, the groups had to share all the information they collectively knew. Groups with white and non-white members substantially outperformed the all white groups. Being with similar people makes us think we all hold the same data and perspective, which stops us from processing and fully sharing information, Phillips explains.

In a study of jury decision making, Samuel Sommers of Tufts University found that members of racially diverse juries exchanged a wider range of information during deliberations. He has also found racial diversity contributes to greater complexity in thinking.

Other research shows we are more diligent and more thoughtful when we hear views from people who differ from us. Anthony Lising Antonio, a Stanford Graduate School of Education professor, and colleagues conducted a study with 350 students from three universities. Groups of these students were asked to discuss child labor practices or the death penalty for 15 minutes. Researchers wrote dissenting opinions and had both black and white students deliver them to their groups. When a black student presented the dissenting opinion to a white group, it was perceived as more novel and provoked broader thinking than when a white student delivered the same dissent to a white group.

Phillips story did not specifically address economic diversity, which has long been an issue in education, college admissions and housing. Low income students are underrepresented at elite universities, where incentive to enroll them is weak. Available public housing has dwindled over the last 25 years. Typing “resistance to affordable housing” into Google brings 1,030,000 results. An eighth grade teacher in a wealthy district recalled a fear expressed in a class discussion of affordable housing: “One of the kids said ‘these people making $50,000, $60,000 a year are going to come in here and rob and mug.'”