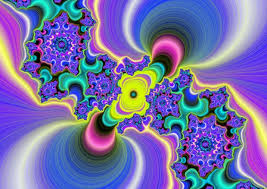 Balinese farmers who maintain their ancient terraced rice fields and self organized networks of villagers cooperating in an intricate system of irrigation and shared decisions achieve rare successes. Without central planning, their planting practices create fractal patterns of growing that promote resilience and optimal harvests.

The collective water systems are known as subaks, which are made up of forest that protect the water supply, the terraced landscape and rice fields connected by networks of natural and man-made waterways, villages, and temples that mark either a source of water or the passage of water downhill to another subak field.  The system is based on the Balinese philosophical principal of Tri Hita Karana, which aims to harmonize spiritual, human, and natural worlds. The congregations of the temples that underpin the subak system seek harmony through rituals, prayers and artistic performances. Bali has about 1,200 water collectives and hundreds of farmers who cooperatively manage the water supply.

To understand their decision processes, Stephen Lansing, of Nanyang Technological University and Stefan Thurner, of Medial University of Vienna, who are both external faculty of the Santa Fe Institute, created models with variables based on water supply and pest damage. Farmers who live upstream generally have enough water, the two explained in the SFI newsletter, and those who live downstream have to adapt to the schedules of those upstream. When farmers plant at different times, pests can devour one field and move to the next. With synchronous planting in nearby fields, many pests drown and the pest load is reduced. That means upstream farmers have an incentive to see that the water is equally shared.

However, water is limited, so there isn’t enough water for all the farmers in the system to plant at the same time. That constraint fosters the fractal growing patterns, which agricultural scientists say promotes maximum harvests.

“The remarkable finding is that this optimal situation arises without central planners or coordination,” said Lansing, a long-time student of subaks. “Farmers interact locally, and make local individual free decisions, which they believe will optimize their own harvest. And yet the global system works optimally.

“What’s exciting scientifically, “ he continues, “is that this is in contrast to the tragedy of the commons, where the global optimum is not reached because everyone is maximizing his own profit” and satisfying his own ego.

The scientists say that fractal patterns, which are abundant in nature but rare in man-made systems, make the system more resilient that it otherwise would be. “The system becomes remarkably stable—again without any planning,” Thurner explains. “Stability is the outcome of a remarkably simple but efficient self-organized process.”

Spatial patterning in ecosystems often happens as a self-organizing process resulting from feedback between organisms and the physical environment. “The centuries-old Balinese rice terraces are also created by feedback between the farmer’s decisions and the ecology, which triggers a transition from local to global scale control,” Lansing says. “Our model shows for the first time that adaptation in a coupled human- natural system can trigger self-organized criticality.” Self-organized criticality (SOC) is a phenomenon in which physical systems evolve naturally to a critical state where abrupt change can occur. The authors say adaptive SOC is a self-organizing process where local adaptations drive the system toward local and global optimization.

The scientists say their model “shows how feedbacks between human decision and ecosystem processes can evolve toward an optimal state in which total harvests are maximized,” and it helps explain how “multi-scale cooperation from the community to the watershed scale could persist for centuries.” They think Balinese rice fields show that under certain conditions it is possible to have sustainability along with maximum gain for all parties.